Felipe Massa has had a good start this year when he finished fifth in the Australian race. 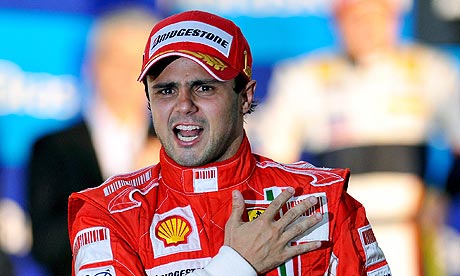 That was followed by him finishing sixth in the race that was held in China and finally, when he finished in the fifth position in Australia. Bottas on the other hand, with more focus and expectations, building up in him, have been able to finish in the eighth position in Australia and tenth in China which was the most recent race. Indeed, races are a matter of fortune as much as they are about skill and expertise that the drivers develop over years of racing.

Being part of the Formula I definitely put a lot of pressure on the racers who need to stay on top form and practice even when off the tracks. Massa has definitely been honing similar skills in his son.

With Felipe is starting off 2016 on a favorable note in race tracks around the world, his son has been taking the virtual driver seat in games like Razor Crazy Carts. With real time racing drivers being racing opponents in this game, Filipinho, Massa’s seven years old, beat Daniel Ricciardo in the game. END_OF_DOCUMENT_TOKEN_TO_BE_REPLACED

Williams F1 driver Felipe Massa has conceded that the Ferrari F1 team is much faster than his team after losing out to Sebastian Vettel in the race to finish behind the two pace setting Mercedes cars at the season opening Australian Grand Prix in Melbourne last weekend.

The Brazilian was caught behind Red Bull Racing’s Daniel Ricciardo and was passed by the much faster Vettel on lap 20 and eventually finished fourth behind the German by four seconds. Massa said that Ferrari did have the quicker car but he also said that he would have kept Vettel behind him if not for the time he lost behind Ricciardo.

Massa said that it is true that Ferrari did have a little advantage in terms of pace, not more than one-tenths of a second, but it is difficult to be absolutely sure about it. He added that however, being in the front was the best way to go about it because it was not an easy track to overtake on.

Felipe Massa mentioned that it was not nice to lose the position like that but he added that it was just the first race of the season and that they are still in with a fighting chance. He said that the Williams F1 team knows that the Ferrari is better and are more competitive than last season and so, the championship will not be easy and will be more competitive. The team is in with a fight but it would have been better to have more points on the board. END_OF_DOCUMENT_TOKEN_TO_BE_REPLACED

The very first day saw Pastor Maldonado winning the race on behalf of Lotus, along with around 69 laps, beating Kimi Räikkönen from Ferrari. Kimi came 2nd with 73 laps & a wee difference of 0.1. the 3rd place was taken up by Daniel Ricciardo from red Bull who had 58 laps.

The 2ns day saw Ricciardo winning the 1st place with the fastest time record & largest sum of laps over the previous 4 days- 143 laps in total. The second place went to Kimi from Ferrari again akin to the 1st day and there was a very tiny difference of stay 90 laps. The 3rd place was taken by Felipe Massa from Williams.

The 3rd & penultimate day saw Venezuelan Maldonado taking the first place on Barcelona circuit. Max Verstappen from Toro Rosso came up with the 2nd position. While Maldonado finished 104 laps, Max completed around 129 laps. Lewis Hamilton, the reigning world champion took the 3rd position and was a mere 1.7 secs away from Maldonado. END_OF_DOCUMENT_TOKEN_TO_BE_REPLACED